Kinect senses me going bump in the night! 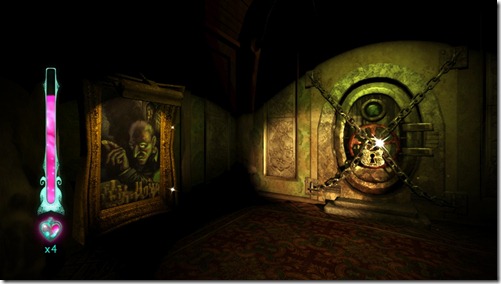 It seems to be that it has been a while since I played a game with macabre underpinnings (probably the last one would be another Kinect game, Rise of Nightmares).  Haunt is an interesting take on  haunted house exploration and puzzle solving via the Kinect.  The game does not take itself too seriously as it strongly leans towards comedic story telling.  Perhaps the strongest indicator that this is the case is the developers use of Double Fine’s own  Tim Schafer, the clown-prince of gaming, as the game’s ever-present narrator Benjamin Muldoon.  Benjy ‘Haunts’ the games paintings and guides you through the adventure.  He seeks to escape his entrapment of the paintings and needs you to collect the Phantaflasks to set him free.

I am very early in the game, but so far I have had a few encounters with some unfriendly ghost which inhabit the mansion.  Sometimes you are dodging poltergeists and ghosts, while the next time you have to get a little ‘Alan Wake’ on the ghost’s ass and fight with light.  While wondering the mansion you need to explore chests, drawers, and the like to find objects to help you in your quest.  There are four Phataflasks in total, each protected by a nasty (but humorous looking) paranormal entity.

Haunt strikes me as particularly light fare for the Kinect sensor.  Perhaps the intensity will increase, but I suspect not by much.  The game reminds me of those Haunted House rides that you would see at the fair.  You are along for the ‘scary’ ride, but you never feel to particularly threatened, just entertained.

I like CFL Football, Video Games, and Social Media....so here I am!
View all posts by SUPERGHOST →
This entry was posted in Kinect, Survival-Horror, XBLA. Bookmark the permalink.