You can do anything…with unlimited continues! 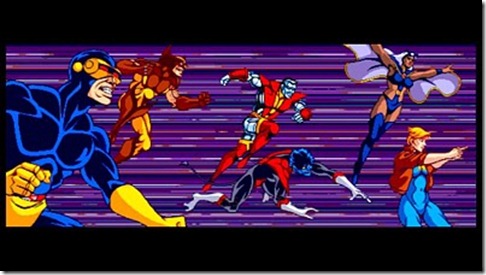 This weekend I finally got around to tackling X-Men Arcade which I purchased on sale for 200 MS points several months back.  X-Men Arcade is an old-school multi-player beat-em-up where up to six players can join forces and take on Magneto and his Brotherhood of Evil Mutants to rescue Professor X from his capture.  The story, and almost the gameplay itself, is secondary to just hanging with your friends, mashing buttons, and cutting a swath through Magneto’s henchmen.

When I did play this weekend I brought my wife and son along for the ride.  We spent probably 30-40 minutes slogging our way through Sentinels, Gator-men, and other assorted trash on our way to the inevitably clash with Magneto where we made short work of him.  What I didn’t appreciate is there was no achievement for completing the ‘story’, rather the game continues after the credits roll, but after you get through the game there really is no incentive to keep playing and continuing after you run out of lives.

While the game is what it is, I enjoyed it the most as a game that we all could play and not take too seriously, and with the game playing ability that my wife has, this is about the most she could handle.  Might have to try her on a playthrough of Double Dragon sometime!

I like CFL Football, Video Games, and Social Media....so here I am!
View all posts by SUPERGHOST →
This entry was posted in Fighters, Mission Accomplished, Retro, XBLA. Bookmark the permalink.