Gameplay shines while the story has an identity crisis…

It seemed only fitting that I would offer my impressions halfway through the campaign of FEAR 3 while featuring the ‘Almost Halfway’ achievement above.  I have been a big fan of FEAR, and its developer Monolith, since it has made its way to consoles.  And the Day 1 Studios developed FEAR 3 has the franchise reaching to new heights of gameplay, it is a fantastic First Person Shooter (FPS), one of the finest I have played in recent memory.  Its story so far, feels like a jumbled mess, and that is saying something as this franchise has seen its share of upheaval.  Read on and find out just what I mean regarding this game’s story and mechanics, and what could have been. 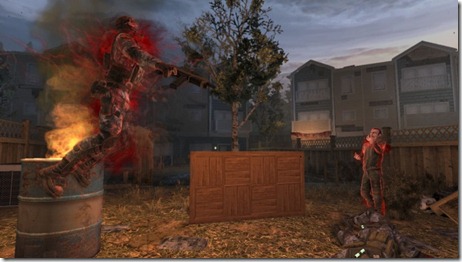 What I would like to touch on first is the story.  I was originally going to write about how the game’s story so far did not really feel like it fell into sequence post the events of FEAR 2, and how that has detracted somewhat from my full enjoyment of the game as I am always trying to reconcile what is going on.  After listening to this weeks Bombcast things make a little more sense…rather I understand more why things do not fit.

I did mention in my previous FEAR posts that there was a schism with the rights to this franchise between Vivendi and Warner Brothers.  At that time two ‘sequels’ were in the works for FEAR, FEAR 2 and Project Origin.  When the rights  situation righted itself Monolith’s Project Origin became born again as FEAR 2: Project Origin and was the canonical sequel. Now as for the Day 1 Studios developed FEAR 2…well that is now FEAR 3 with the story beats from Project Origin shoe-horned into that project to make it fit.  Surprisingly, it kind of works, but it also kind of doesn’t, and it kind of leaves the gamer scratching their head with an uneasy deja-vu feeling about the whole story. 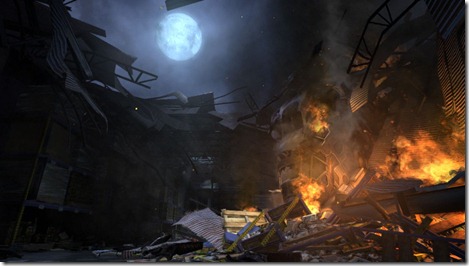 Fortunately for the player, the game makes up for its story shortfalls of story development with a top-notch campaign shooter experience, and I have not even had the privilege of exploring its co-op or playing the game as Paxton Fettel’s ghost.  I really like the games gun mechanics, its cover system, the players ability to hop-over objects.  The game rewards you with points for exploration and your combat ability.  These rewards accentuate your character both campaign and multiplayer.  The game feels really good when you play it and has the additional mechanics of ‘bullet-time’ and melee combat to add into the mix.  I definitely would stack this game up against any other shooter on the market, at least in the campaign.  As for the multiplayer, it shares the campaign’s playability, but not its graphical prowess.

So far I have found the game’s multiplayer to be quire fun.  I have only played in the cooperative modes so I am not sure what the competitive modes are like, but the modes I did play take some cues from other popular FPS franchises, and that is not a bad thing.  F****** Run! (‘Fucking’ if you couldn’t figure it out) plays and feels like a Left 4 Dead game, the difference is that a wall of death is constantly on your tail, and if one person gets left behind to the cloud, the whole team loses, so you have to play as a team or else it is game over.  Contractions is like your ‘Horde’ mode from Gears of War or ‘Zombies’ from your Call of Duty games.  They do have their FEAR-based twists to make it their own though.  I really liked these modes and hope to play more of them, and to try the others, in the future. 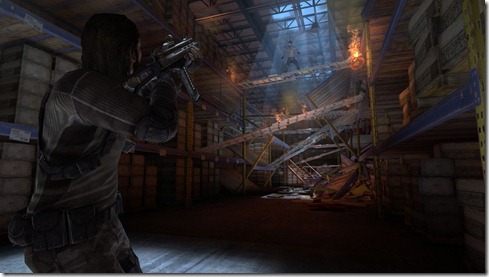 For as much as I love this game thus far, I cannot help but think how much more I would be enjoying it the story was a little more cohesive.  Perhaps as I continue with the game it will coalesce into something more satisfying, but I am not holding up much hope at this time.  For me, I can put up with shoddy mechanics if a game has a tight and interesting story, this time I have to let the gameplay do the heavy lifting while the story limps along for the ride.  Hopefully that will do the trick.  I do feel like I could play this game quite a bit, I will just always be left to wonder which FEAR story I am playing (and so not even get me started on FEAR Files)

I like CFL Football, Video Games, and Social Media....so here I am!
View all posts by SUPERGHOST →
This entry was posted in Co-op, FPS, Survival-Horror, Zombies. Bookmark the permalink.