After a busted-ass code for the Gears of War 3 beta was delivered to me from EB Games I was saved by my buddy Cru who had an extra code for the Gears beta.  If it was not for Cru’s generosity I wouldn’t be in the beta and I wouldn’t be able to write this post.  But I am in, I have played a decent amount, and the short hand impression of the Gears 3 beta…it pretty hot!

The first thing that got my attention was Gears of War’s new found speed.  Gears 2’s multiplayer mover at a glacial place compared to this new iteration.  The clip that the game is running at has forced me to adjust, but its all for the better.  The frenetic action coupled with dust, blood, and body parts flying makes for some madness on the multiplayer pitch.  This improvement alone is going to give the Gears of War 3 multiplayer the legs it deserves.

Weapon wise, it is a mixed bag for me thus far.  While the Digger and the Sawed-off Shotgun make for some interesting battles, the Pendulum / Retro Lancer has not really caught on with me yet.  In previous Gears I was all about the Lancer and the ‘shotty’ with very little use of the power weapons.  I could certainly see that trend continue with some Sawed-off mixed in there for good measure.

All the other components: Graphics, audio, presentation, etc. seem to be improved over the last.  I really like the implementation of medals and rewards which has been significantly expanded from what I can see.  I am also very interested in what other customizations of your character will be available in the final product. 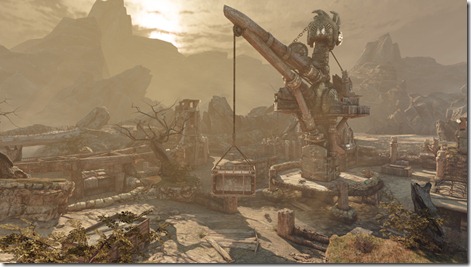 As I mentioned earlier, the Gears 3 beta is hot!  The bad thing…the beta is for a limited time, then we will be back to waiting for the games official release with its full multiplayer suite and four-player co-op.  It is good to be a Gear!

I like CFL Football, Video Games, and Social Media....so here I am!
View all posts by SUPERGHOST →
This entry was posted in FPS, Gears of War, Xbox 360. Bookmark the permalink.