Cleaning up the Mass Effect 2 DLC

As I mentioned in my last post I have been using the past couple of weeks to get in some playtime on other games.  Mass Effect 2 has been my latest victim.  This past weekend I was able to finally clear off the missions made available in the Firewalker Pack.  I was also able to complete the Overlord DLC.

Being able to play the Firewalker Pack was small consolation for losing the Mako from Mass Effect 1.  It may strike you as odd but using the Mako to explore planets in Mass Effect 1 was one of my favourite parts of that game.  It took me back to my days playing Starflight on the Commodore 64.  while small consolation, it was a decent piece of content and the Hammerhead was certainly a lot easier to get around with, I hope they find away to bring exploration an vehicles together as a part of Mass Effect 3.

Overlord was a decent downloadable as well.  It provided a decent story while being able to use the Hammerhead and explore some new terrain.  It also was not overly long, you wouldn’t have much trouble completing it over an evening playthrough. 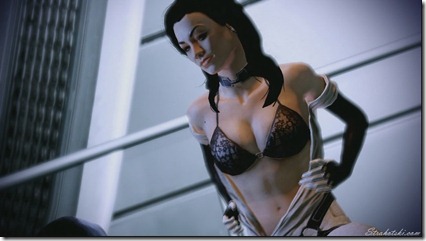 While knocking off DLC, I also took the time to pursue my Sheppard’s love interest in the game, Miranda.  As you can see here Miranda is all about good times in the Normandy’s engine room.  How is that for a mission accomplished!  I am not quite done with Mass Effect 2 yet, I just downloaded Lair of the Shadow Broker and have heard nothing but good things about it, I look forward to seeing where it takes me.

I like CFL Football, Video Games, and Social Media....so here I am!
View all posts by SUPERGHOST →
This entry was posted in DLC, RPG. Bookmark the permalink.