Can you handle The Truth?

Thanks to games like Modern Warfare 2, Borderlands, and Forza 3, Assassin’s Creed II found itself relegated  to my gaming backburner for many of the months since its release.  So with a minor lull between my must-play game releases I took it upon myself to attack this game and see it through to the end because I really did want to find out about the conclusion to this game. After a late-night gaming session I finally completed Assassin’s Creed II, and as it is fresh in my mind I thought I would ‘re-view’ the game and discuss my thoughts on the game, its legacy, and the franchise going forward.

To lay the ground work here I need to step back a little further and discuss the original Assassin’s Creed. Assassin’s Creed (from now on will be referred to as AC) was probably the most divisive game of its time.  Wild swings in review scores and gamers’ opinions were the rule of the day.  One thing was for certain though, the game sold incredibly well, all but assuring us that we would return to the AC universe.  While many of the complaints levelled against the first AC were certainly valid, I personally found the story extremely compelling.  Also, the game was released in that sweet spot between other heavy-hitting Ubisoft franchises such as Splinter Cell and Prince of Persia, scratching that stealth and parkour gaming itch.  After completing AC I was extremely interested in finding out where they would take the franchise. 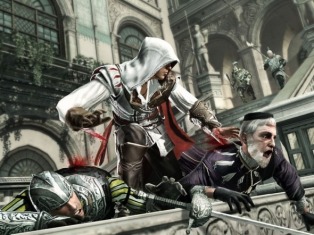 Assassin’s Creed II (referred to as ACII from this point on) continues the story where in left of in the first game.  I am going to avoid any serious spoilers in this article, but I will say as much that ACII follows the continuing adventures of the reluctant assassin, Desmond Miles, and his assassin ally Lucy as they probe the world of cellular memory via the Animus.  While in the Animus, Desmond participates in the life of his ancestor Ezio, a Renaissance assassin, as he follows a trail of revenge and exploration against the Assassin’s sworn enemies, the Knights Templar.  These ‘memories’ explored by Desmond are meant to help the Assassins of the future in their war with the Templar, a war they appear to be losing.

Ubisoft took the feedback from the first game to heart when building the next game.  The biggest complaint by far was the repetitive mission structure.  ACII boasted a variety of different missions, some optional, some mandatory, but all more varied and interesting than its predecessor.  While I did find these missions significantly improved, I really only found the core missions to be of interest.  A lot of the side missions too became repetitive or had no bearing on the game.  Fortunately they were optional.  The developers also greatly increased your ability to traverse the cities without too much harassment.  Sometimes in AC you could hardly take a step without being molested my some crazies or beggars in the streets.

Strengths of the first game became even stronger in ACII, but not flawless.  The parkour ability of the assassin is certainly the highlight of these games, and in ACII Ezio finds more varied and colourful environments to explore, full of collectables and interactions, far exceeding the original in scope and function.  With a little more work on the fluidity of this design and the control of your avatar this portion of the game would be unstoppable.  The game’s combat also became more varied with new techniques and weapons making for more interesting assassinations and fights.  Again, as good as this part of the game is I believe it still needs some refinement.  In particular when you are surrounded by several characters in combat.  Also, I think the game needs to force you to use more of the varied assassination techniques the game has to offer.

In my opinion the game’s greatest strength is its story.  That is why I put up with the flaws in AC and wanted to come back for more in ACII.  The use of historical figures, places, and environments is one thing, but to weave them into a multi-generational tale of mystery and intrigue is an amazing accomplishment all to itself. ‘The Truth’ portion of ACII’s story was enough alone to keep me motivated and excited for continual play of this game.  As with the first game the stories’ conclusion, the end of ACII will leave you wanting for more.

One of the really interesting innovations brought into this game was the addition of the family villa.  The villa allows you to earn currency, store your weapons, armour, and treasures, generally it serves as your hub world with the other cities and destinations as the spokes.  The only bad part of the villa is that building it up is almost over too soon.  I think I would have enjoyed more to do there as a break from the game’s other duties.  Another really great addition to the game was the Assassin’s tombs.  There your clambering, puzzle-solving, and speed were put to the test.  These tombs I hope are the building blocks for future iterations of the game.

Assassin’s Creed II is, I believe, a few choices and tweaks away from becoming a legendary franchise.  The foundation of Assassin’s Creed is very solid and they should be able to build significantly on the titles from there.  Personally, I would like to see the focus shift to Desmond’s character.  I want to see his character explore more varied environments as well.  In doing so developers would have to tread that line by not becoming Tomb Raider or Prince of Persia.  I would also like to see the RPG elements expanded on.  Once again, a great foundation was built, now they can run wild and really take Assassin’s Creed to the next level.  We may not have to wait to long to see Desmond again as there is potential for the next iteration to arrive within the year.  Is that enough time to build upon the foundation?  We will see.